Long time, no write.  Some big news since the last post, I’ve accepted a Tenure-Track teaching spot at Shoreline Community College, starting in the fall.  Woo!

Some big new starts for both of us.

The Spring term ended up nicely.  At the end of April, I went to Gainesville, Florida for my friend Amber’s wedding.  The ceremony was super beautiful in a field under a giant oak tree, and the after, and after after party were a blast.  It was really great seeing a lot of my friends from college and doing some of the old Gainesville things.  Tim and Rikki and I hung out quite a bit, Fae and I rode some of the Hawthorne trail, I ran into some of the old music guys and got to sit in with their Friday night gig, and everyone else!  And Krishna Lunch!!!! 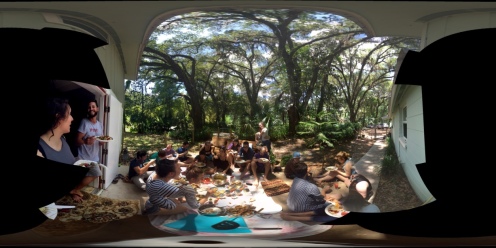 A most excellent Sunday morning Brunch with Friends

The rest of the Spring finished up nicely, and now we are taking the summer off.  The Workshop has picked up a weekly gig at the Europub in Capital Hill which has been going really great.  ::My gig schedule:: has kept me busy, too.

Sugar and I got to do some traveling during July.  My cousin Katie got married in Vermont, so we spent a week and a half over on the east coast.  We took a red-eye flight and got off the plane in the morning and immediately climbed ::Camel’s Hump::, the third tallest peak in Vermont.  It is known for its stunning 360 views, but all we got were clouds.  Katie and Josh took us to the whimsical Magic Hat Brewery based out of Burlington, which was one of my favorite breweries in college.  They don’t usually make it out west.  Then we went to the Sugarbush resort for the wedding.  I played golf for the first time ever, and I was very bad.  We climbed the hill behind the resort after a diverted attempt to play the most expensive game of disc golf known to man.  We went to a parade for Independence Day and saw Bernie Sanders.  Then I took a picture next to a replica of his face.  The last day of the trip, we went to Montpelier, learned that it was the smallest capitol in the country and used that knowledge the next week to win points at trivia!

At the top of Lincoln Peak, Sugarbush Resort, VT

After coming back from the wedding, we left almost immediately and drove to Jackson, Wyoming to see the other side of my family.  We climbed Snow King with my cousin Rachel.  Our family took a van out and around Yellowstone Park.  We jumped off a big rock into a lake in the Tetons. 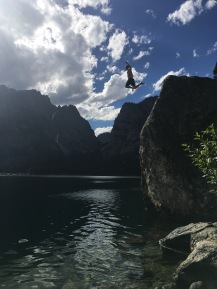 Now we’re back in Seattle for the time before school starts.  Newlyweds Katie and Josh came to visit and we showed them the things.  Jake and his friends came to visit from Bend.  We got to go to a Mariners game with them.  I played a gig at Benaroya Hall, which was wild.  We have a possible trip to see my parents in Leavenworth at the end of the month.  I’m leaving Saturday for a backpacking trip into the Olympics for a few days, but then its back to playing all of these gigs.

We have a beer in the works, a Rosemary Saison that needs to be bottled soon.   I finished another complicated cutout just about the same time I finished reading the complicated book Infinite Jest (related, but not on purpose) SUMMERTIME!

One thought on “Sierpinski Gaskets and Infinite Summer”

I was born a couple dozen years ago in Chicago, Illinois. I grew up in Beach Town, Florida. I got a Bachelors Degree from Gatortown, Florida and a Masters Degree from Rainy-town, Oregon. I live in Seattle.
%d bloggers like this: